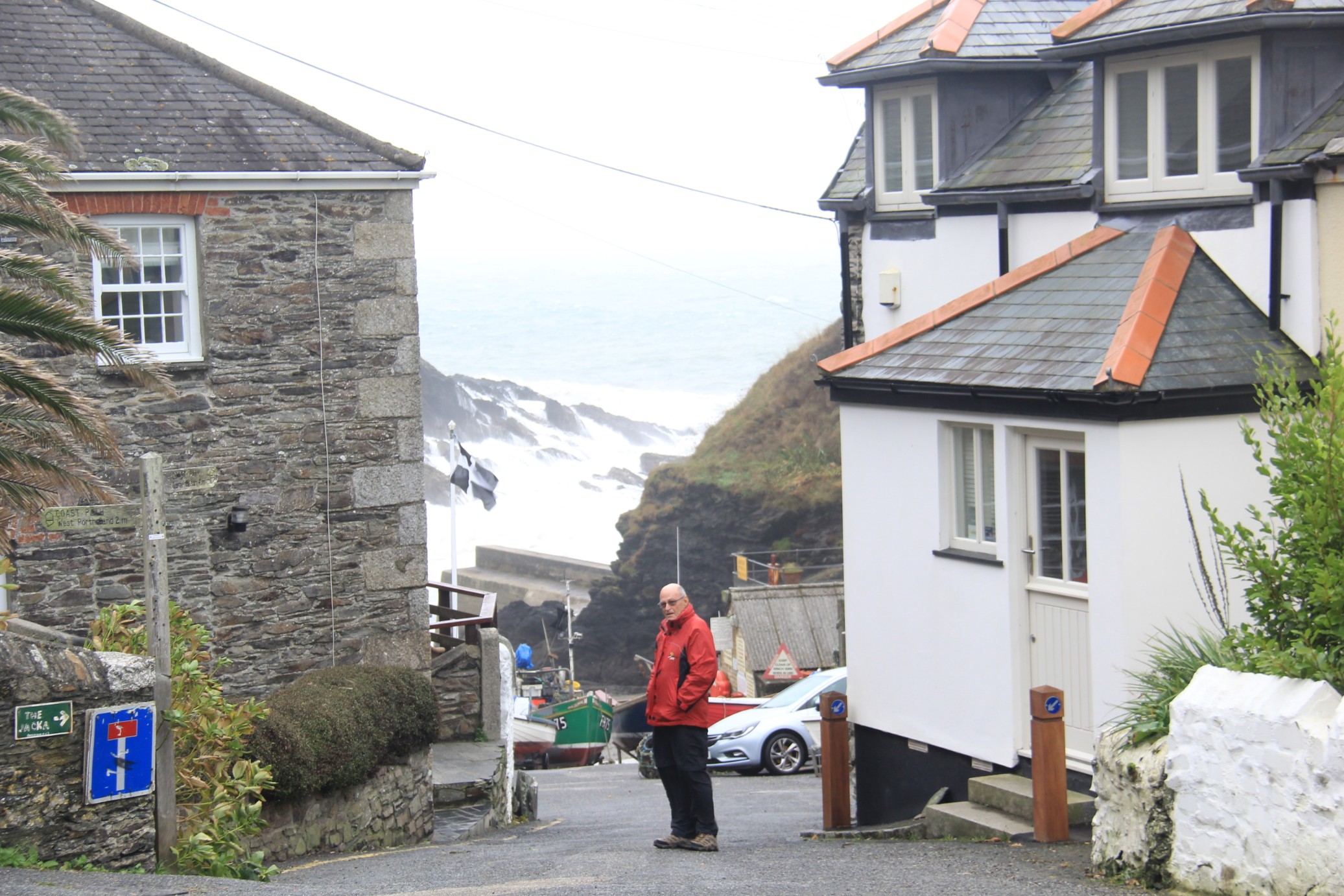 Posted at 03:14h in Uncategorized by Bev & Frans Hamer
0 Likes

After leaving Seatown we drove to Portloe in Cornwall on the day Storm Callum (ex hurricane) was battering the west coast, so it was very windy and wet. The radio reports were of coastal flooding, power outages and trees down, so it was with some trepidation that we headed towards the storm. As it happened we had a good journey with no delays and arrived at our hotel (The Lugger) in time for lunch. The wind was very strong and the waves crashing into the tiny bay and slipway, but all was warm and dry inside. The hotel is a very old place perched right on the slip way with low beams, wonky stairs and a shabby chic appearance.  We went out for a short walk after lunch but soon came back inside. 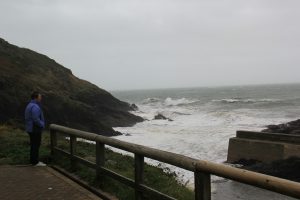 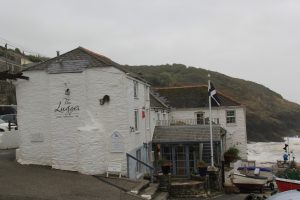 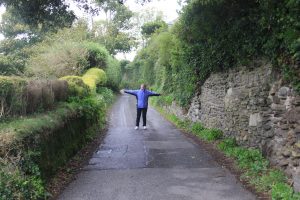 The next day we went out to see The Lost Gardens of Heligan, but they were closed due to the danger from the high winds. We then decided to go to Truro but being Saturday it was impossible to find anywhere to park, so decided to go to Falmouth instead. Half way there we came across a road blocked off by emergency vehicles and had to turn around and backtrack – at which point we gave up and went back to Portloe. Frans had by this time mastered the art of driving on the very narrow lanes which at times saw us squeezed into the hedge inching past another car and all the time the proximity alert squawking like a banshee.

The next day the weather had settled and we made it to the Heligan Gardens. These are beautiful gardens, farmlands  and parklands spread over a huge area that were “lost” after WW2 due to lack of staff, and were rediscovered many years later and restored to their former glory.  We could only see a small part of the area in the time we had, and some parts were still closed due to downed trees and debris, but what we saw was amazing and lunch in their cafe which uses their own produce including meat was delicious.

We then drove to St Mawes, another small seaside village, and looked around their historic castle. 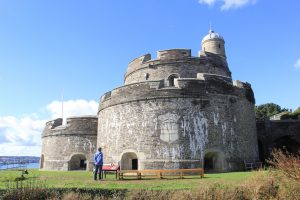 The following day we drove to Dunster in Exmoor National Park, via Tintagel because we wanted to see King Arthur’s famous castle. Tintagel village is very old and has some lovely antique buildings, but unfortunately the castle was closed as they are rebuilding the bridge to the entrance. 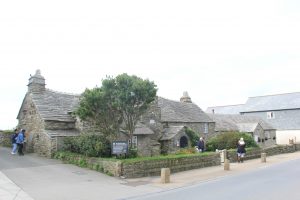 On the way to Dunster we had to wait for a herd of cows and a flock of sheep as they moved to new pastures. 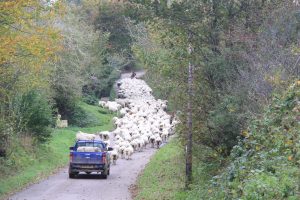 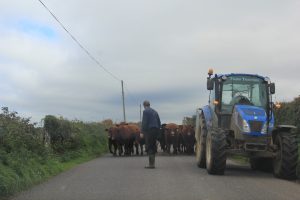 The countryside was gorgeous, but foggy in places and in the narrow lanes it is impossible to stop and take photos but we managed to stop for this one. 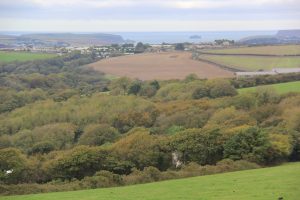 We stayed at the Luttrell Arms which is a very old, quirky hotel with a rabbit warren of bars and snugs downstairs and very comfortable bedrooms upstairs. The village of Dunster has beautiful old buildings and an historic Yarn Market in the middle of the road which has somehow survived through the centuries.

Dunster is in a valley and Dunster Castle is on one hill and Conygar Tower opposite on another hill. The tower is a “folly” built by Lady Alys Luttrell. Apparently she used to take her guests there for afternoon tea. The castle was in the Luttrell family for 600 years, from 1376 until 1976 when it was handed over to the National Trust. It was modified and modernised in the 1800’s and is a really lovely grand family home. In the end though, the upkeep of these places is so difficult and it is great that the Trust can keep it open to the public and in good condition. 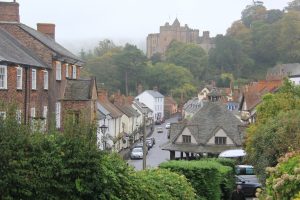 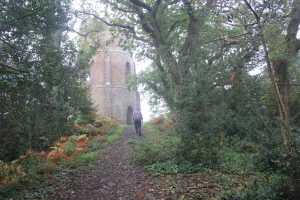 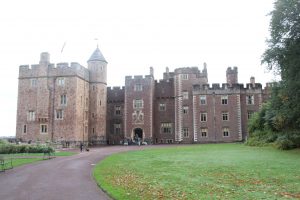 After leaving Dunster we went to Nutcombe Bottom for a short walk to see England’s tallest tree, a lovely old Douglas Fir, then headed off to Bath via Cheddar. We had lunch there and left via Cheddar Gorge which is an impressive steep gorge with mountain sheep grazing on the steep slopes. In Bath we handed back the car, thankfully with no damage due to Frans’ driving skills, and checked in to our last B&B of the trip. 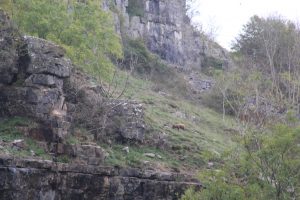 We spent the next day walking around Bath,  did an audio tour of the historic Roman Baths which was really interesting and mind boggling with the antiquity of the original structure. More walking up to Victoria Park where we found a cache and then to look at Royal Crescent,  a beautiful semi-circle of ornate town houses and the nearby Circus,  another old town house development in a complete circle. 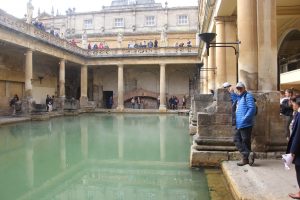 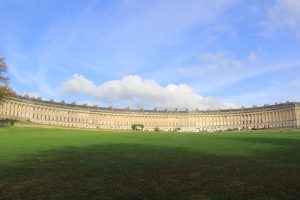 Yesterday we travelled to London by train and checked into the Royal Trafalgar Hotel for 2 nights. It is on the edge of Trafalgar Square so we were able to walk around in the afternoon and see all those places you see on TV – Parliament Street, Downing Street, Horseguards Parade etc.

Today we went to see Kym, and when we returned late afternoon we were confronted by thousands of people in and around Trafalgar Sq after a massive anti-Brexit rally where there were apparently in excess of 700,000 people.

Tomorrow we head off to Southampton to board the Sapphire Princess for our cruise to Dubai. We will not have much access to internet over the next 4 weeks so this could be the last blog until  we get home.