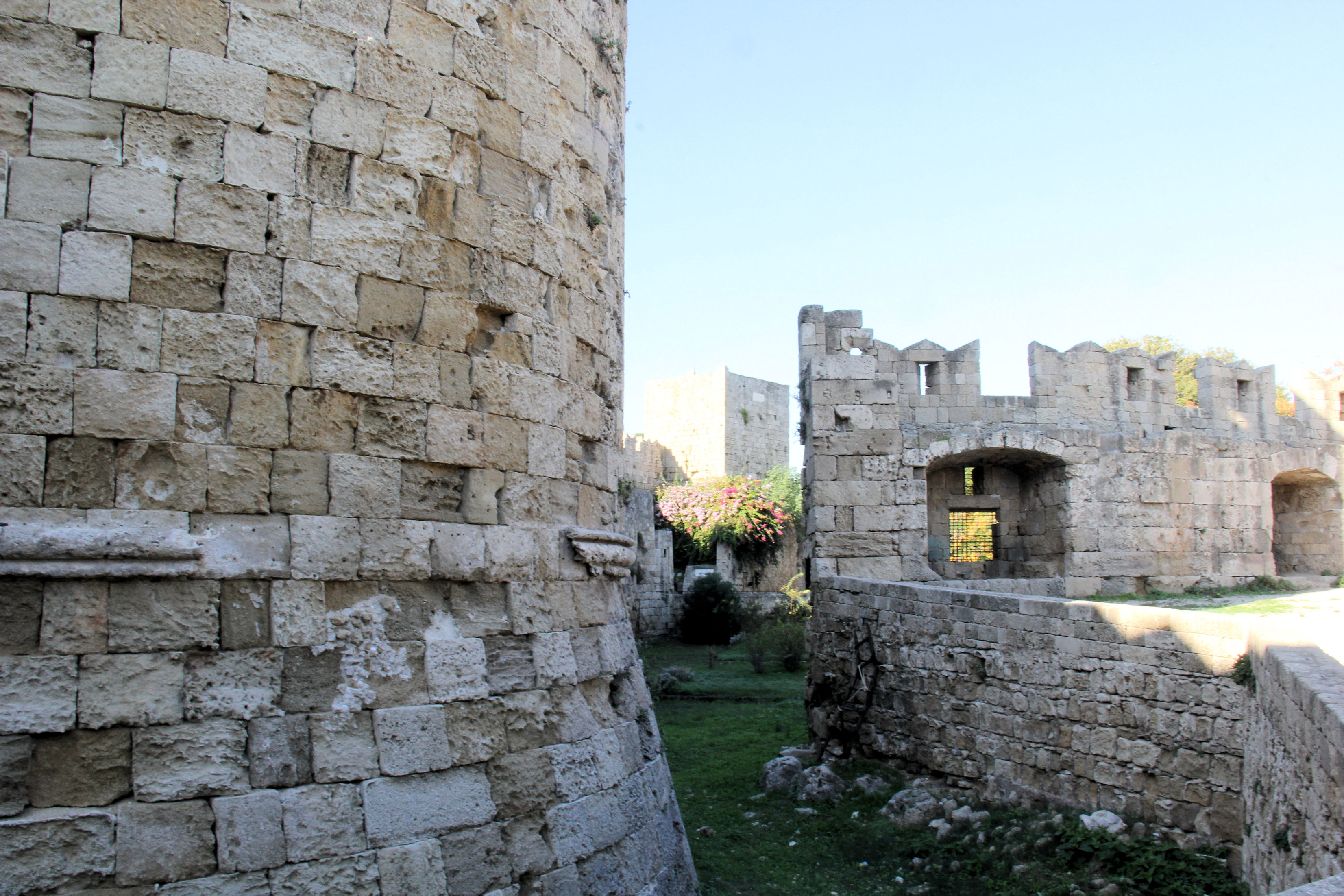 Posted at 19:32h in Uncategorized by Bev & Frans Hamer
3 Likes

Note: Click on any picture to see a larger view.

4 November – a day at sea after a stormy night and time to catch up on the blog. The ship internet was very slow but we managed to upload the blog and photos. We also heard news that after we left Italy & Sicily there was a lot of flooding in Sicily and loss of life. We are so thankful that we have missed all the really bad weather.

5 November – we docked in Piraeus, Greece and went on the ship excursion to Athens. The bus dropped us off and we headed up the road to the Acropolis, bought tickets and started up the steep slopes. It was a warm sunny day so we took our time, stopping to admire the views of the ancient ruins and the city around the site. When we reached the Parthenon at the top it was absolutely crowded with people and difficult to take photos. Restoration works are ongoing to preserve this beautiful site. 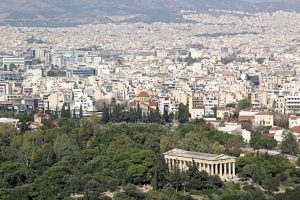 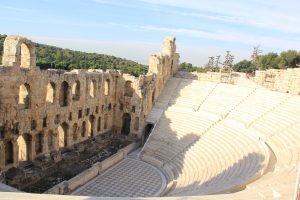 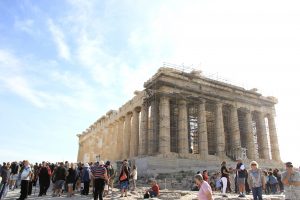 Afterwards we walked back down to Hadrian’s Arch and the Temple of Zeus which is also undergoing some restoration. The National Gardens nearby was a beautiful shady place to walk around before heading back into the city for a late lunch and a wander around the nearby Plaka (market) with lots of little streets  jam packed with shops and cafes. During the day we found 3 geocaches. Then it was time to board the bus and go back to the ship. 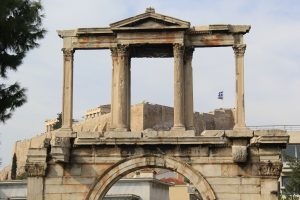 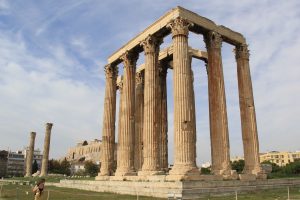 6 November – we arrived in Rhodes on a lovely clear sunny morning and moored in the cruise port alongside the historic city. The city walls are very imposing and beautiful. We walked along the portside and into the old city through one of the arch gates and wandered through the town. The various stages of history from the Ottomans through to the present day are well documented and very interesting. Most of the buildings are beautifully preserved but we found some in the very narrow back alleys which were crumbling – some had “for sale” signs. Most were just a single tiny room downstairs and presumably one upstairs. The Grand Masters Palace was very impressive. 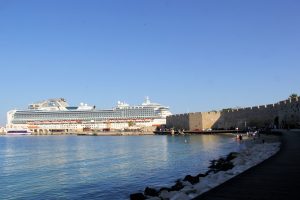 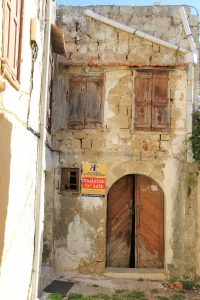 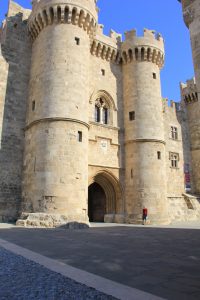 There is a huge moat area between different walls, which has been turned into parkland. We walked along there and found 3 geocaches. We had lunch in a café, wandered around and around getting lost in the maze of narrow streets, which are mostly too narrow for cars so the locals use motor bikes and scooters to get around. We could easily spend a week in Rhodes as we only saw a tiny bit of the island. 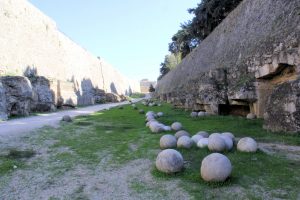 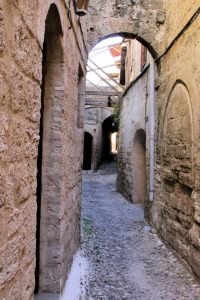 7 November – another relaxing  sea day with calm seas and lots of sunshine. We anchored off Port Said in the late afternoon with lots of other ships nearby, to wait for entry to the Suez Canal.

8 November – we got up at about 2.30 am to go up on the top deck and watch as the ship joined a convoy entering the Suez Canal. It was about 3.30 am when we sailed through the entry and watched the lights of Port Said go by. Then we went back to bed until 7 am. We spent most of the day watching on deck as we sailed along the canal through Egypt, with sand on both sides and a wall on each side with frequent watch-towers and military posts. There were also several towns on the west side with a surprising amount of greenery. Visibility was reduced due to very hazy conditions, with lots of dust in the air. There were heaps of tiny fishing boats all along the canal with one or two men on board, all happily waving at the ship as we went by. It was a very interesting experience. We exited the canal after lunch and sailed into the Red Sea. 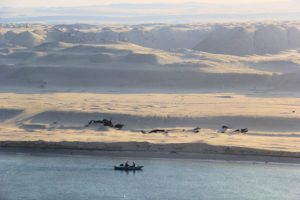 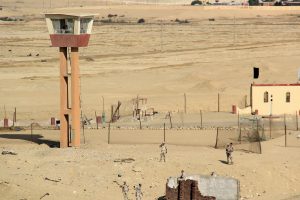 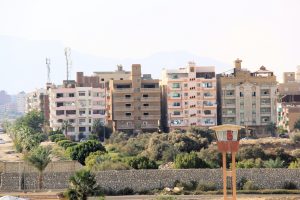 9 November – At sea, with some excitement in the morning as the ship had a “pirate drill”. The Captain announced the drill and all crew had to go to their assigned stations and all passengers had to return to their staterooms and wait for further instructions. In a real pirate attack we would have been relocated from our balcony cabin to an inside corridor or into an inside cabin until the emergency was over. The ship was set up with high pressure hoses rigged on the open decks to repel boarders, and high frequency sound equipment to stun anyone who tried to board. Apparently there have been no attacks on passenger cruise ships for quite a while, as it is more lucrative for the pirates to hijack cargo ships.

10 November – we arrived in Aqaba, Jordan for our last port visit. We were booked on a tour to Wadi Rum (of Lawrence of Arabia fame) but after breakfast they announced that all shore trips to Wadi Rum and Petra had been cancelled due to severe flooding in the region the previous day. We heard that many people died in Petra and several hundred passengers from a ship which was there had to be evacuated and returned to the ship. Of course we were disappointed as this would have been a highlight of the trip, but we were very relieved that it was not us involved in the tragedy and sorry for all the people who were affected.

It was very hot, so we slowly wandered around Aqaba and bought a couple of souvenirs, visited the small ruins of the original city, and returned to the comfort of the ship.  Along the way we saw tiny market garden beds growing vegetables and small stalls in the streets selling fresh produce. 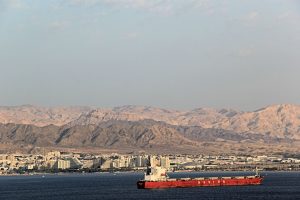 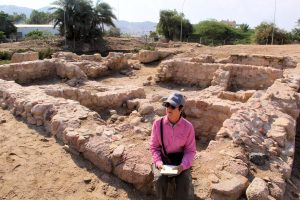 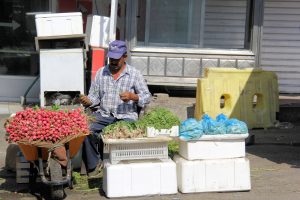 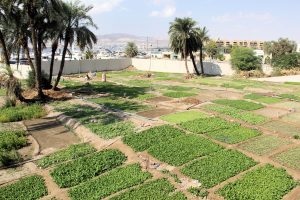 The view from the ship over the wharf was not very inspiring. 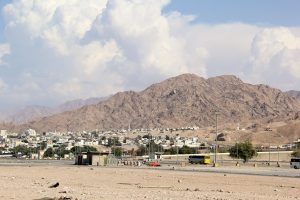 11 November – at sea for 6 days as we made our way through the Red Sea and the Gulf of Aden past Egypt & Saudi Arabia, then Ethiopia, Somalia and Yemen, all considered to be “unfriendly waters”, then the Arabian Sea to Dubai, and mostly at the ship’s top cruising speed. There were security officers on the bridge and the open decks 24 hours a day watching for any threats. Life went on as normal for the passengers and we were delighted to see a huge pod of dolphins, lots of flying fish and sea birds.

Once we were past Yemen and into Oman waters it was more relaxed and the ship slowed down a bit.

On the last day Bev “performed” again in a Drum circle group – 2nd from the right. 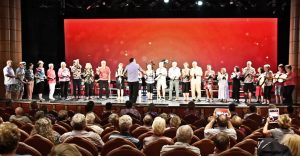 17 November – we arrived in Dubai and after a speedy disembarkation and immigration process were whisked off to Atlantis, the Palm by an Arabian Adventures car and driver. Unfortunately we could not check in until after 2pm but we spent the time wandering around the resort and having lunch in their lovely outside café. Once we got into our room we relaxed in the airconditioning for a while then went out for a walk along the seafront. After dinner we spent some time in the fabulous Lost Chambers Aquarium which has an amazing range of sea animals and corals. 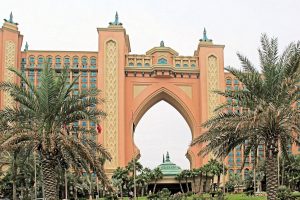 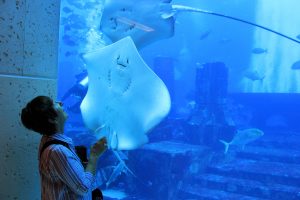 18 November – we spent the day on the Hop-on-off bus mainly in the Old Dubai area. It was very warm so we did not walk much. We went to the Dubai Museum which is in an old fort and has excellent displays of life as it was in the past, and artefacts from various eras. It was so crowded though, we did not stay long. 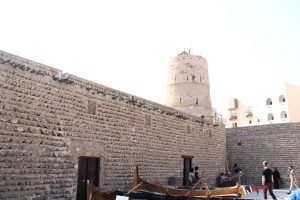 We got back on the bus and went to the Souk area next to Dubai Creek, wandered around some incredibly exotic alleys crowded with shops of all kinds, but the ones that really caught our attention were the spice shops with their piles of brightly coloured aromatic spices on display.  You could buy almost anything in the souk, but surprisingly we could not find anywhere to eat. 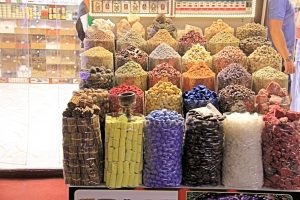 After wandering around and getting lost, we made our way back to the creek and took a one hour Dhow trip. That was an eye opener to see all the beautiful old residences along one side and the new high rise on the other side. 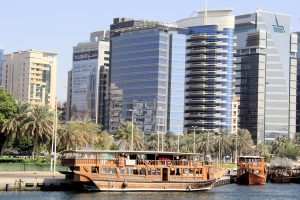 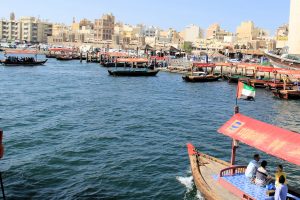 One of the many huge shopping malls in Dubai is Wafi City and the bus pulled in there for a look. It is an amazing complex with some buildings resembling pyramids and pillared frontages with hieroglyphics, statues of pharaohs and Egyptian gods. Everything in Dubai is on a grand scale! 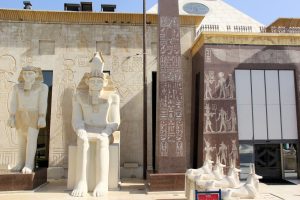 We continued on the bus to the Dubai Mall and we went to the food hall for a late lunch. It was Sunday, a holiday, and the place was crammed with people of all kinds and screaming kids, so we decided to leave and continue on with the bus tour. We next got off at the Souk Madinat which is an enormous beachside resort where some sort of event was taking place and there were police and security guards all over. We went into the public area with a lovely covered souk and had coffee. Then it was time to get a taxi back to Atlantis and relax before dinner, followed by another visit to the Aquarium.

Dubai has huge amounts of construction going on everywhere. They are preparing for a huge influx of visitors for Expo 2020 and a projected increase in resident population of 1.5 million people. 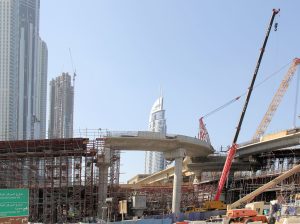 19 November – Up very early as our  car was picking us up at 7 am. Unfortunately Frans was suffering with a belly upset so the long trip home was not very comfortable for him. We arrived in Brisbane at 6.15 am and had to wait for over 4 hours  for our shuttle to arrive and finally arrived home at about 2.30 pm after almost 30 hours of sleepless travel.

25 November – after being home for a few days we have just about recovered from the trip and now Frans has the task of going through 1000+ photos and compiling one of his powerpoint slide shows so we can revisit our trip and enjoy it all over again.

It was a fabulous trip and well worth doing, and we are sorry it had to end! It is nice to be home though and we will stay here for the summer and start travelling in the van again when the wet season ends and it cools down a bit.