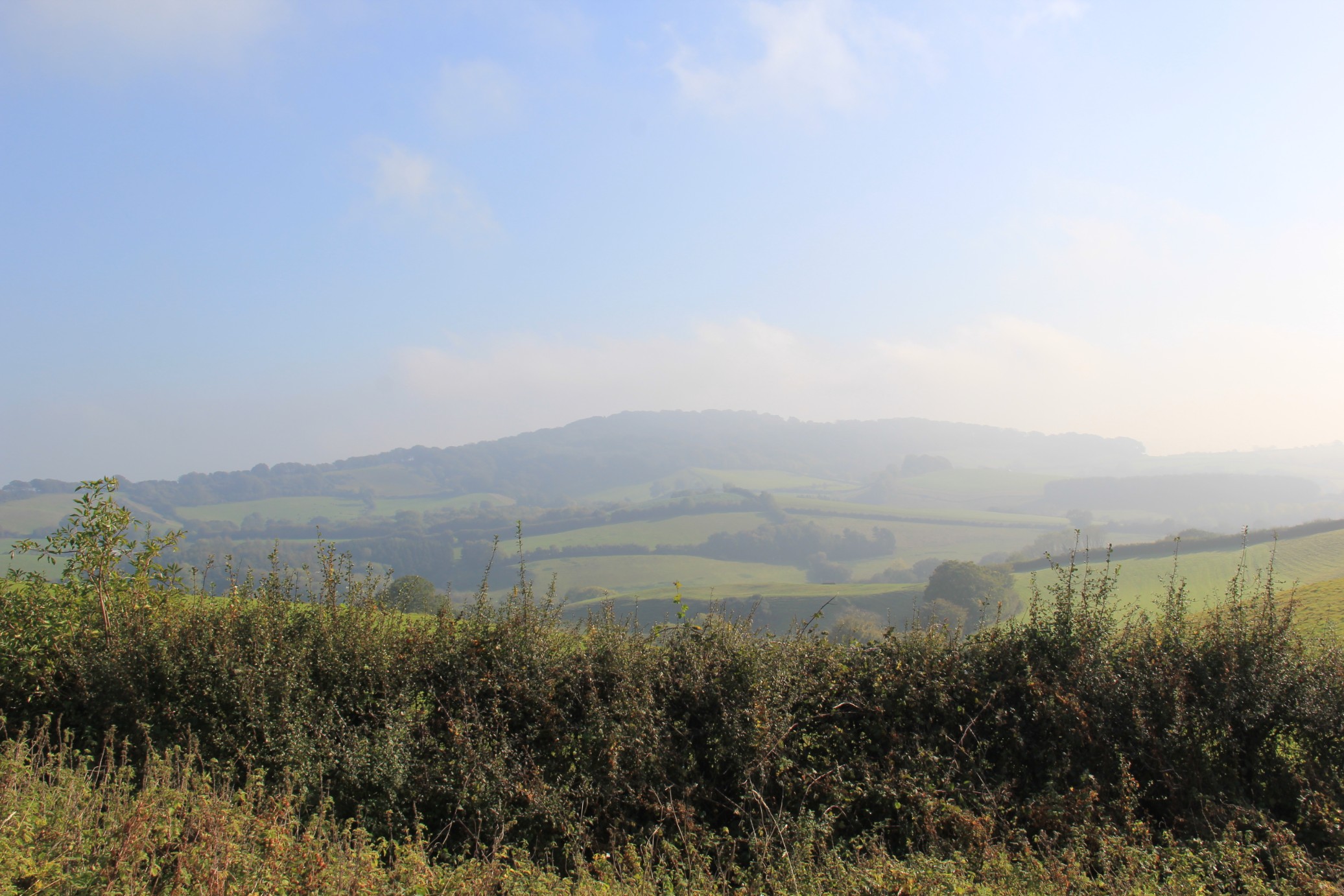 Posted at 02:28h in Uncategorized by Bev & Frans Hamer
3 Likes

Wed 3/10/18 was cloudy, but dry and warmer. We took the train to Zaanse Schans to see the old windmills. There are only 12 windmills still there out of about 1000 built many years ago. We toured one which still operates, grinding minerals and other materials to make pigments for artists’ paints. There is also a tourist village with quaint old houses & barns, with cheese-making, wooden shoes and other small businesses. We had lunch at a lovely restaurant on the canal, then took the train to Amsterdam Amstel, and a taxi to the apartment building in Amstelkade where Frans was born and lived his first 6 years before going to Australia. 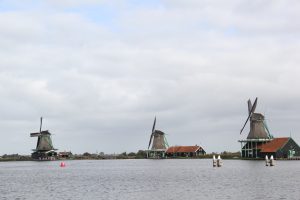 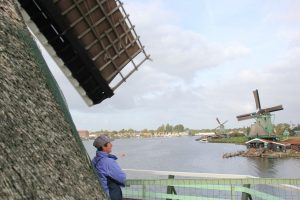 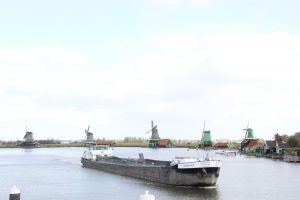 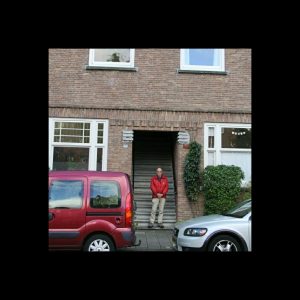 The next morning we left Utrecht and travelled to Brussels by a roundabout route as the trains to Rotterdam were cancelled again. We checked in to the Pullman Hotel at the station and walked into the grand square in the city centre for lunch. It was beautiful, but the streets were so much more crowded and busy than when we first visited in 1996.

The next day we took the train to Brugge and spent a few hours wandering around looking at the old buildings, watched 3 musicians playing incredible classical music, did a canal cruise and had lunch in the square. Once again, the place was far more crowded than 1996. The ‘sculpture’ of the whale in the canal is made up of plastic waste recovered from a beach in Hawaii to illustrate the environmental waste problems facing the world. 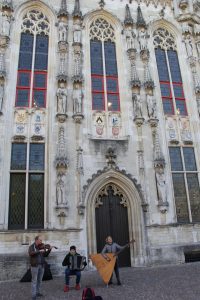 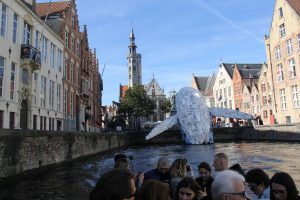 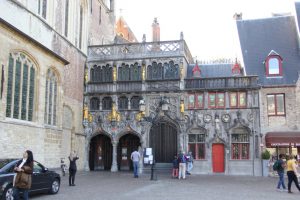 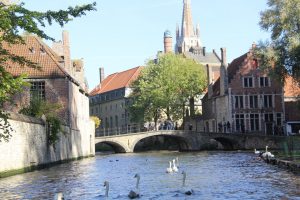 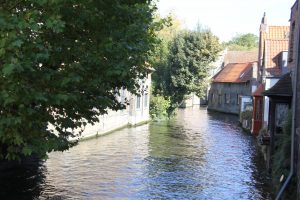 The next day we left early on the Eurostar to London, changed trains to Dover and picked up our hire car. We had asked for a small automatic but the only one they had available was a VW Saran, a 7 seater much too big for our needs. We checked in to our accomodation in Ramsgate, went to Bev’s sister’s 60th birthday party that night and caught up with Bev’s family. The weather was awful, very windy and wet.

After breakfast the next day we set off in beautiful weather for Portsmouth, mostly along motorways with few holdups, admiring the lovely green countryside and the autumn colours on the trees. We checked in to our B&B in Southsea, were lucky to park the car in their off-street parking, and walked around town and the seafront for a while, looking at Southsea Castle and finally ending up at the Emirates Spinnaker tower. The view from up top was great. By this time we were too tired too walk back so got a taxi instead. Frans was still very congested from his cold. 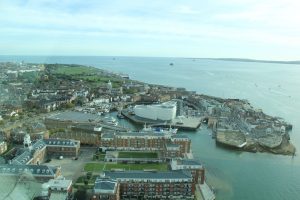 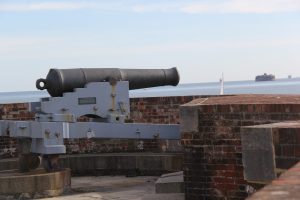 The next day we walked to the Hoverport and caught the hovercraft for the 10 minute ride to the Isle of Wight. We caught local buses on the island for a tour around and were amazed at how the drivers (we had only female drivers) managed to handle the huge double decker buses around the very narrow streets and lanes on the island. At one point though, our bus came upon another bus coming the other way on a bend and it took several minutes of backing and shuffling before they could pass each other and continue. Of course each bus had a lineup of cars behind! We sat on the top deck going through the middle of the island and saw a partridge shoot going on in an adjacent field. We were not able to take any decent photos on the island, except for the pier. 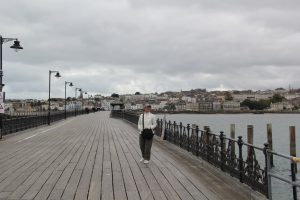 We managed to arrange to swap our big car for a small VW Golf, so we found the Europcar office in the morning, swapped over and headed off to Dorset. We deviated through part of the New Forest and stopped for coffee in a little village called Burley, because the free roaming horses were blocking the road right next to a cafe. We went through narrow country roads and through Weymouth to Portland Bill on the tip of the peninsular off Weymouth. 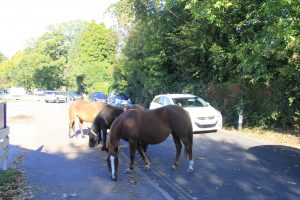 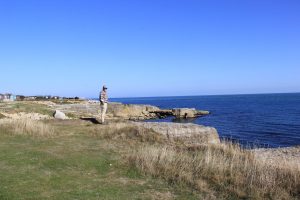 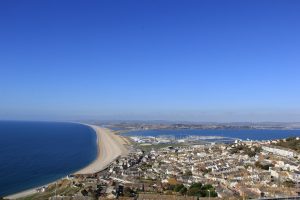 We were starting to realise that parking is going to be a big issue in this area. Late in the day we found our way to the Anchor Inn at Seatown, our home for 3 nights. Getting there was a bit hair raising, going down Sea Lane which is a single lane with high hedges on both sides and tiny cut-outs here and there to allow 2 cars to just squeeze past each other. The Inn is on the edge of the Jurassic Coast in a beautiful spot, very popular with visitors who come in for lunch and dinner. There are only 3 rooms above the Inn and we have a huge room with a huge bathroom. The food is very good too. The photos show the Anchor Inn (on left) from the hill opposite, and the hill viewed from our room. 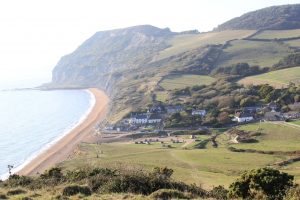 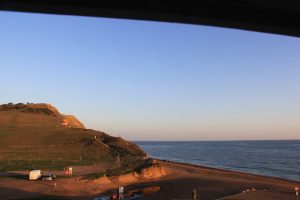 Yesterday we did a day trip around the area in very warm and sunny weather, driving through more very narrow country lanes, with fabulous views across the countryside. We went to Montecute House, a very grand old manor, and then tried to visit Lyme Regis but after driving down its steep & narrow streets and not being able to find  a car park, we drove out again. 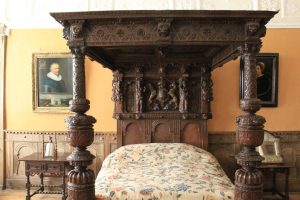 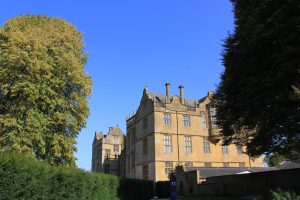 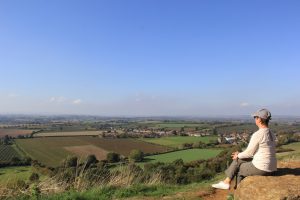 Today is the start of a period of wet and windy weather. We have spent all day at the Inn catching up on photos and this blog. This afternoon our friends Colin & Linda who live in Weymouth came to visit. We met them on our Canada/Alaska trip 10 years ago (they lived in W.A. then) and saw them a couple of times in W.A. They moved back to U.K. 7 years ago so it was great to catch up again.

Tomorrow we leave here for Portloe in Cornwall, hoping for better weather than the forecast of wild, wet and windy.